Endings in which a rook faces two pawns are more common and difficult than rook versus single pawn endings. There are 420 games in my mega database from the beginning of 2013 through mid-June 2014 in which this ending is played for four or more moves. 57 or 13.6% of those 420 games did not reach the result expected by the tablebases (meaning that there was a result-changing error). Some of those errors were, as we shall, by very high rated players.

There are basically two types of rook versus two pawn endings:
We will cover the case of connected pawns in this post.

There is some basic positions and principles that you need to play this position. First, the rook can't stop two pawns on the 6th or one on the 5th and 7th on its own, but it can stop and even take connected pawns that are less advanced by attacking the furthest advanced pawn from behind. 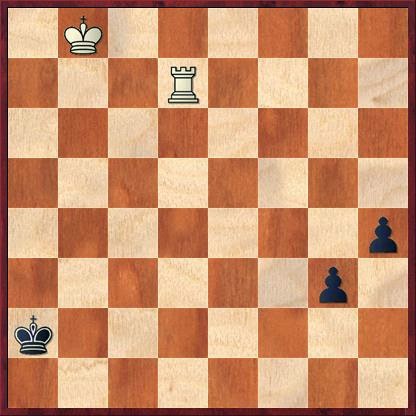 In fig 2, the rook is in front of the pawns can stop them until the king arrives to take them. 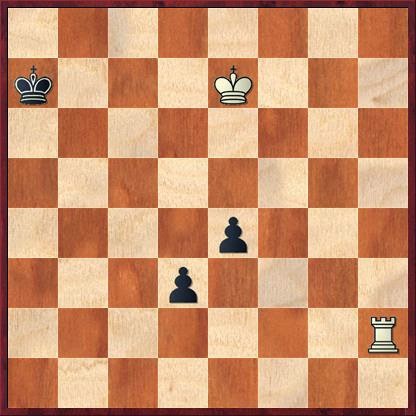 When the pawns are too strong, the side with the rook can sometimes still draw if he can threaten mate. 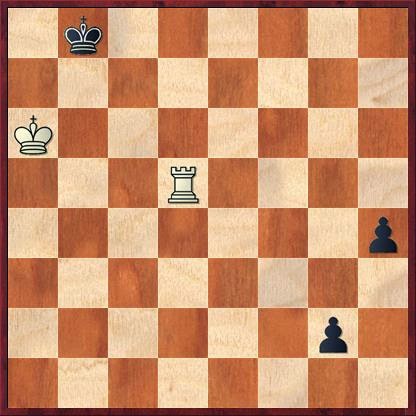 White plays 1.Rg5 h3 2.Kb6 (threatening mate) Kc8 3.Kd8 Kc6 etc. There are some nuances to this, but I would not worry about them as this position is very rare. For the curious, the full analysis is here.

Against advanced pawns defended by a king, the side with the rook wins in most cases if it can get its king in front of the pawns. Once it is there, the technique is a little tricky. 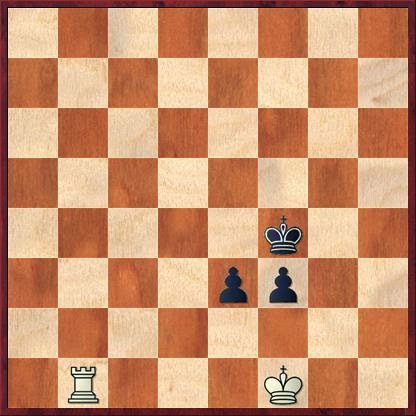 White's winning idea here is to put black in Zugzwang so that he has to advance his pawns at an unfavorable moment. Here, for example, with black to move 1....e2+ Kf2 loses.  To accomplish his goals, white must move the rook behind black's king. Thus, 1.Rb8 and if 1...Ke4 with the idea of outflanking white's king 2.Rf8 Kd3. Here 3.Rxf3? would be a mistake because after 3...Kd2 white has nothing better than trading his rook for the pawn. Instead, white should play 3.Ke1, ending black's outflanking plan. Black still can't advance the pawns without losing them all, so he retreats and defends the f3 pawn with 3...Kd4. Now, white puts black in Zugzwang by playing Rf7, losing a tempo. If black moves his king the rook takes the f3 pawn, and if one of the black pawns is pushed then the white king occupies the square on the second rank that is no longer attacked by a pawn. The pawns are now blockaded by the king and will soon be taken. For the full analysis go here.

If the pawns are well advanced and the side with the rook can't get his king in front of them, it is often the case that the best he can get is a draw (if that). The basic drawing plan is to trade the rook for the lead pawn when it promotes and to take the trailing pawn with the king. 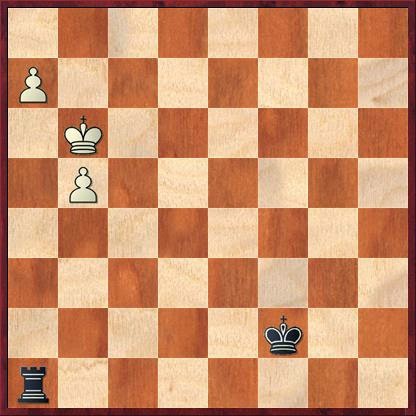 Sometimes getting the king close enough requires some maneuvering to gain a tempo, as in the following from Andreas Barwich (1935) - Horst Keusch (2021) 1-0 played in 2013. 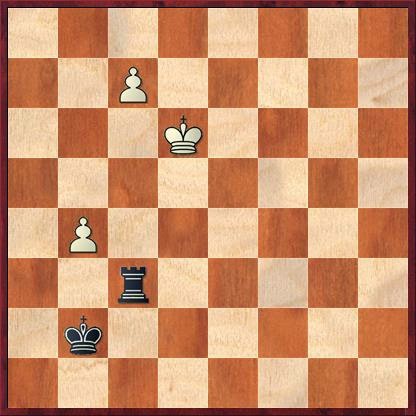 The side with the pawns has two strategies to win when the side with the rook is fighting to get his king close. One is to shoulder out the enemy king. The other is to force the exchange of the pawn closest to the enemy king for the rook, leaving the other pawn to promote in the king and pawn ending that follows. In fig 7 you see the first strategy used and in fig 8 the second. 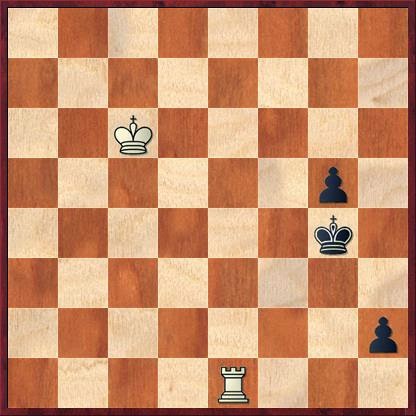 The position in fig 8 is discussed in many different endgame books. It is from Topalov - Beliavsky (Linares, 1995). 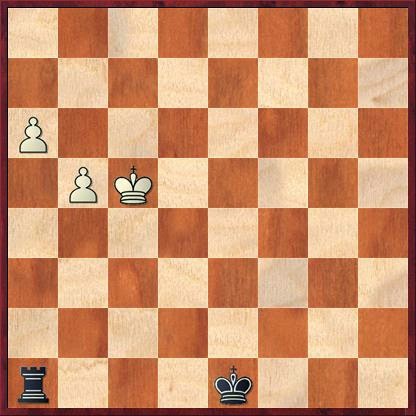 What about 1.b6, does that not win? No, not if black knows an important nuance here that often shows up in Rook versus two connected passed pawn positions. 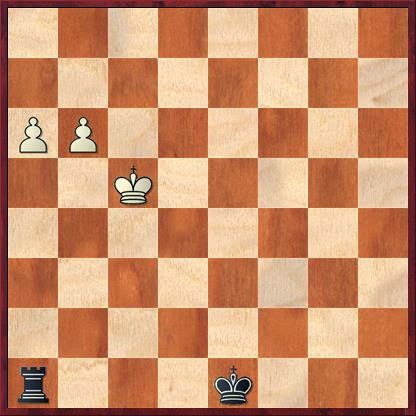 To avoid what happened in fig 8, sometimes the rook needs to target the pawn closest to his king. Thus, in fig 10 the only move with which black can draw is 1...Rf3! This contradicts the usual advise given for the rook versus two connected pawns endgame, which is to put the rook behind the most advanced pawn. This advice is correct in fig 1 when the king was not defending the pawns, but is is wrong here. If black plays 1...Rg3? then 2. Kg7! (Topalov's idea) Kd4 3.f6 Ke5 4.f7 Rf3 5. f8=Q Rxf8 5.Kxf8 and the black king is too far from the g6 pawn to prevent its promotion. By contrast, after 1...Rf3 2.g7 Rg3 3.Kf7 Kd4 4.f6 Ke5 and black will take the f pawn with the king after the rook is exchanged for the g pawn. 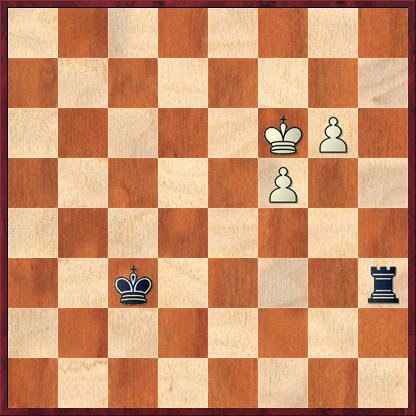 Sometimes, though when the side with the rook has to initially ignore the pawn furthest back to win. This is true in the following position. 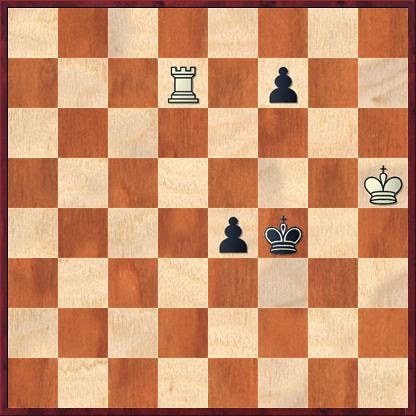 The following, from the 1994 game Throstur Thorhallsson (2460) - Matthew Sadler (2560) 0-1, is an amazing example of the player with the rook ignoring the trailing pawn. 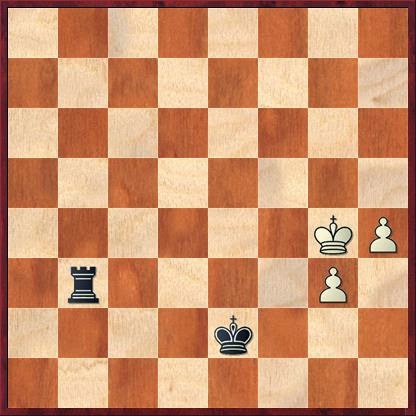 I found this example in Karsten Muller and Frank Lamprecht, Fundamental Chess Endings (2001). The verbal comments and some of the analysis are my own. Here black played 1...Rb4+. Black might have decided upon this after calculating the alternative 1...Kf2?, which only draws after 2.h6 Rxg3+ 3.Kf5 as black will have to trade his rook for the h-pawn. But, he did not even have to think about 1...Kf2 if he saw the idea behind Rb4+, which is to play the position as if this were a rook versus rook pawn ending. In this case, as we have seen earlier, the side with the rook forces a promotion of the rook pawn to a knight, which is trapped. Thus, after 1...Rb4+ we have 2.Kf5 Kf3 3.h5 Rb5+ 4.Kg6 Kg4! (black ignores the g pawn, which it can mop up later) 5.h6 Rb6+ 6.Kg7 Kg5 7. h7 Rb7+ 8. Kg8 Kg6 9.h8=N+ Kf6, which reaches the position in fig 13. If black was conversant with the rook versus rook pawn theory we have covered, he could have easily foreseen this position and begun his concrete analysis here.


Fig 13. White to Move. What is the Evaluation? 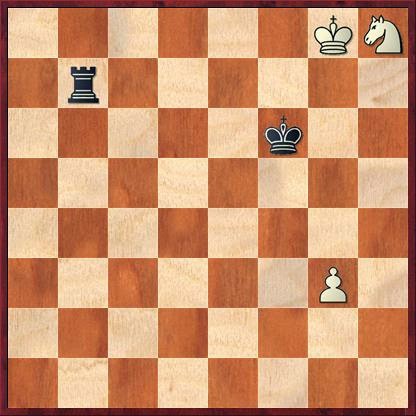 One of the goals of all of the analysis done here is to come up with general principles and procedures for playing these endings. And, it needs to be made clear that it is hard to generalize about these positions. One should not, for example, conclude from the positions in figs 8 and 10 above that the player with the pawns should always push the pawn closest to the enemy king so as to win with the pawn that is further away. Sometimes, a different approach is needed, particularly when the position is less favorable to the player with the pawns. That is true in the following position from Anton Shomoev (2528) - Mihail Kobali (2647) 0-1, played in 2006: 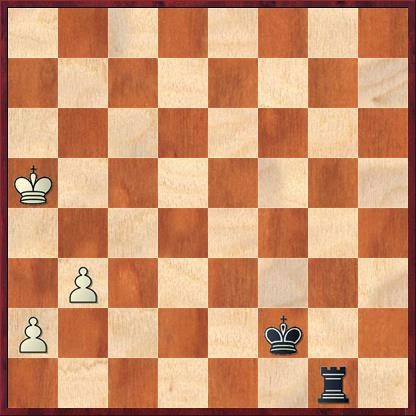 Here white played 1.b4?, which loses because the black king is too close to the pawns. Play continued 1...Ke3 2.b5 Kd4 3.Kb6 Rg6+ 4.Ka7 Kc5 5. a4 Rg4 0-1. Instead, white needs to recognize that he does not have winning chances and thus must focus on forcing a trade of the rook for the a pawn. The line given by John Nunn in his Nunn's Chess Endings, vol. 2 (2010) is reproduced here (but it is worth noting that 1.Kb5 and 1.Kb6 also draw): 1.a4 Ke3 2.Kb6 Kd4 3.a5 Rg6+ 4.Kb5! and black can't make further progress. Nunn notes that if the white b pawn were on b2 instead of b3 then white's king could move into c4 and white could win. What he does not say is that the winning technique is exactly that of Sadler in the game discussed above! For confirmation see the analysis here.

A common error by the player with the pawns is overambitious play. Often he tries to save both pawns (presumably with an eye towards winning) when he should forget about one of the pawns and focus on achieving a draw with the other pawn as if he were playing a rook versus single pawn ending. 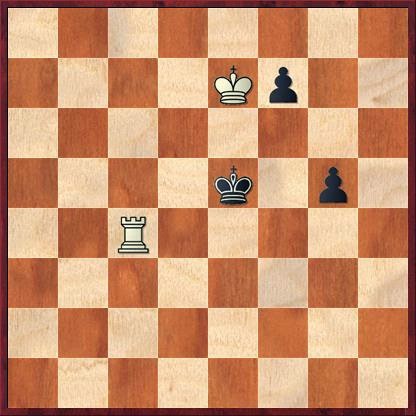 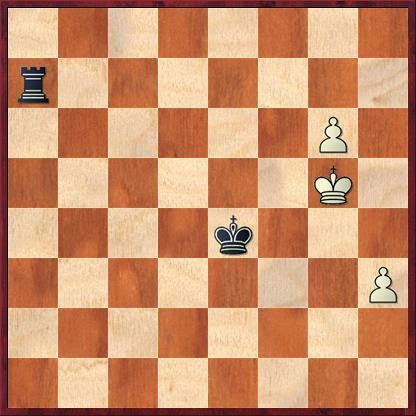 So what have we learned from this survey of rook versus two connected pawn endgames? There are a number of specific ideas such as the hesitation check (fig 9) and the exchange of the pawn closer to the enemy king (fig 8). But, beyond these the reader should take away some general guidance as to how to approach the complicated cases in which the side with the pawns can defend one or more of them with his king. Both sides need to know that their chances depend on whether the side with the rook can get his king in the game. The rook can't handle the pawns alone. The king is needed to win, and in most cases it is also needed to draw. The side with the pawns can draw--as in the case with a rook versus lone pawn endgame--if it can manage to force a rook for pawn trade or promote a non-rook pawn to a knight. A win for the pawns requires forcing the rook for pawn trade and then promoting the other pawn. All this should be obvious.

The key point is that each player needs to focus on what is likely to be possible in a given situation. The side with the pawns needs to keep in mind that if a win is not possible the path to a draw often requires abandoning one of the pawns and playing the position like a rook versus pawn endgame. In any case, the key to saving or winning the position is almost always keeping the enemy king at bay and that should usually be the first priority. And, the side with the rook likewise needs to keep in mind that he can only win if he is not forced to trade his rook for a pawn. Thus, in some cases the trailing pawn needs to be ignored to focus on the leading pawn. And, it should be added, if the trade of the rook for the lead pawn is unavoidable, the side with the rook needs to make sure it can take the trailing pawn as well (usually with the king).

Of course, this analysis has not exhausted the topic of rook versus two connected pawn endings, which offers many surprises. As concluding food for thought, try to solve the following, which appeared in 2014 in Leonid Dviniskikh (2002) - Elis Tsarukian (2167) 0-1: 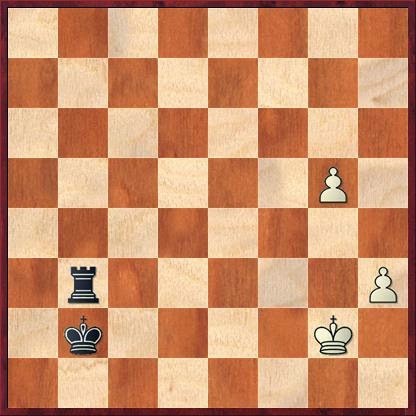 The only move that draws is the surprising 1.g6!! White sacrifices his most advanced pawn in order to get black's rook off the third rank and make it possible to shoulder the black king away from his h pawn. Otherwise, 1.h4 allows 1...Kc3 and black's king gets in the game. (A further illustration that the priority almost always needs to be given to keeping the enemy king at bay!) After, 1...Rb6 2.g7 Rg6+ 3.Kf3 Rxg7 4.h4, Kc3 5.Kf4 Kd4 6.h5 Rf7+ 7.Kg5 Ke5 8.h6 and black will be forced to trade his rook for the pawn.